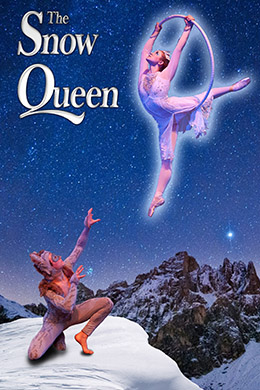 La Ca?ada, CA: California Contemporary Ballet (http://www.CalBallet.com and http://www.SnowQueenBallet.com) will present the 15th anniversary showing of the original ballet ?The Snow Queen,? with three shows on December 21st, 22nd and 23rd. The ballet, first shown in 1998, is the brainchild of Artistic Director Aerin Holt and composer Randall Michael Tobin, and is based on the classic tale by Hans Christian Andersen.

For 15 years, Aerin Holt has served as Artistic Director of this holiday classic. With sold-out performances each year, Ms. Holt and her Company might be inclined to wax nostalgic, but they show no signs of slowing down. Instead, they are gearing up for a dazzling anniversary extravaganza to mark their 15th season at the Glendale Community College Theater, with an evening performance at 7:30pm on December 21st, and matinees at 2:00pm on December 22nd and 23rd.

Each year since then, the professional company dancers are supported by dancers, actors and gymnasts from the community in chorus roles, resulting in a 65-member cast from Los Angeles and the local communities of Burbank, Glendale, La Ca?ada Flintridge, La Crescenta, and Pasadena.

This year, ?The Snow Queen? will feature new professional talent performing the starring roles including Lauren Farrell (from Burbank), who was personally selected by Holt to perform the title role of the Snow Queen.

In an effort to keep the show fresh, Holt continually changes many of the roles and conducts auditions every season. ?In fifteen years, we?ve had fifteen casts,? Holt boasts. She also enjoys reworking the choreography to fit the talent of her cast members. While The Snow Queen may be touted as a ballet, Ms. Holt infuses each performance with classical and contemporary dance styles that weave together the classic winter-time tale by Hans Christian Andersen.

Further changes to the production have included the introduction of aerial arts, where ?creatures? resembling wolves, panthers, leopards and other wild animals perform on hanging silk scarves as the Snow Queen delicately balances 40 feet in the air on a hanging hoop. Indeed, Ms. Farrell finds the aerial aspect of her role to be challenging. A trained ballerina, Farrell is getting a crash course in aerial ballet. ?I?m really excited and look forward to performing aerial. An opportunity to learn and to perform a role like this is exciting?.

Also featured in this year?s production is Lissa Farrington (La Crescenta), as she skillfully blends dance and gymnastics in the role of The Crow. Dancer Julia Houser (La Ca?ada Flintridge), and a long-time member of the youth company, will be featured in the role as Gypsy Girl, a role that requires both dance and gymnastic skills. A seasoned aerialist, Houser is also featured on the aerial scarves and is seen performing many dazzling moves before falling in a death-defying drop, catching herself mere inches from the floor. Holt adds, ?It was always my intention to integrate circus arts into the ballet, thereby creating an atmosphere of the fantastic.”

Holt set out to create a new ballet tradition and the Company?s 15-year evolution is living proof of her success. A cursory search of the internet reveals that the Snow Queen has grown in popularity as more companies appear to be producing the story as either a ballet or play. Holt firmly maintains that her Company blazed a trail by being the first to adapt the story for ballet, and it has evolved into an annual December production much like the Nutcracker. California Contemporary Ballet?s Snow Queen has become a community favorite for the holidays and offers a seasonal, family-friendly alternative to the myriad of Nutcracker productions, at affordable ticket rates.